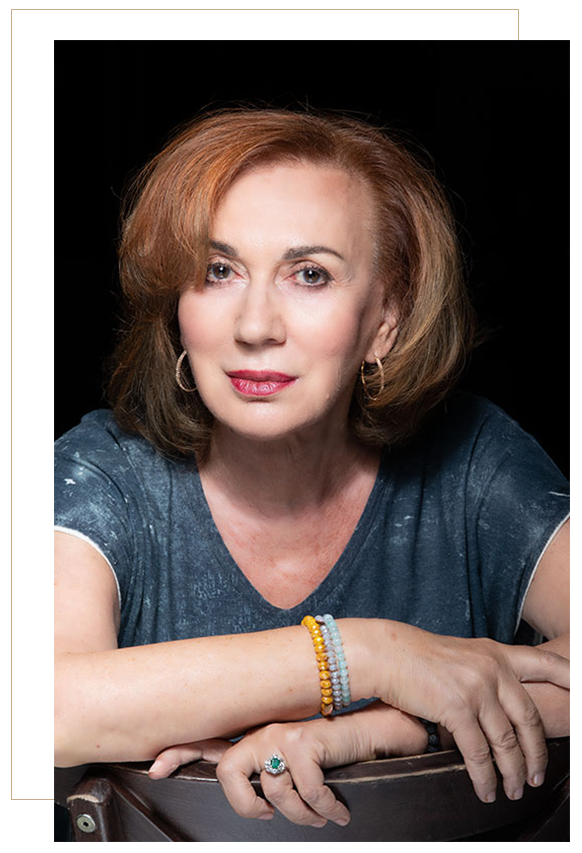 Maria Sartova studied voice as one of the very last pupils of Ada Sari, the celebrated Polish singing teacher, at the Warsaw Music Academy where she graduated with honors. She then travelled to Milano and to Paris to gain perfection in style and technique.

At the same time, her love of theatre, developed over many years of contact with great artists such as Grotowsky, Kantor, and Szajna, turned her imagination more and more to staging and the use of space in theatre. In Paris, her meeting with Bronislaw Horowicz, a pupil of Leon Schiller, the world famous director, developed into a long friendship and artistic collaboration, where she became very active in theatre staging and film productions.

ASince 1996, Maria Sartova has directed documentaries for Polish and French television on cultural celebrities from these two countries: In Search of Time’s Past, Frederic Chopin and the Romantics, Romanticism in Exile, Mécène or Pygmalion: a Portrait of Misia Sert, All about a Small Blue Monkey, featuring such actresses and actors as Leslie Caron, Maria Laborit, Andrzej Seweryn and Alexandra Stewart.

Since 2002, she has staged many theatre productions: George Bizet’s Pearl Fishers, Giuseppe Verdi’s A Masked Ball, Vincenzo Bellini’s Norma, The Csàrdás Princess  by Emmerich Kálmán, Hello Dolly!  by Jerry Herman, 42nd Street by Harry Warren (Masque d’Or, for Best Musical of the Year), Der Freischütz by Carl Maria von Weber, Ragtime by Stephen Flaherty. At the second National Musical Theatre Festival that was held in Gdynia, Poland, Ragtime was awarded Second Prize for the artistic accomplishment of the company and the stage direction of Maria Sartova. She then went on to direct La Veuve joyeuse by Franz Lehár, Chant d’amour et d’extase by Karol Szymanowski, Les Sept péchés capitaux by Kurt Weill, The Sound of Music by Richard Rodgers, Don Giovanni by Wolfgang Amadeus Mozart, The Golden Fleece by Alexandre Tansman, La Boheme by Giacomo Puccini and Orpheus in the Underworld by Jacques Offenbach, the Gyspy Baron by Johann Strauss II, the Carmen by Georges Bizet.